Our multi-award winning Hot Climate Hillside House at Kintyre Estate Dubbo will feature on “Australia’s Best Houses” on 7two on the 19th of March 2014.

You can read more here: (and ignore the date of screening…)

Here’s an excerpt from the original article above:

WHEN builder Stephen Orth started work on a striking and rare home at Dubbo he had no idea that one day it would go on show to the whole country.

He looked on the Kintyre Estate project as a collaboration with the owners and designer to produce an “awesome product”, but more was to come after its completion.

Its elements recently captured the attention of a television program scouting for a location to amaze its national audience.

Mr Orth reunited with Gavin Dale of Dubbo-based Gavin Dale Design and owners Peter and Debbie Pritchard for the occasion.

“The relationship between the four of us is great, the understanding, that’s why we have such an awesome product,” Mr Orth said.

The program presented by Gary Takle approached the builder in December about featuring the house after reading of its MBA award.

“For a small country town to be recognised on a national show, it was really amazing,” he said.

“It’s a credit locally to a good designer and a team of suppliers and sub-contractors.” 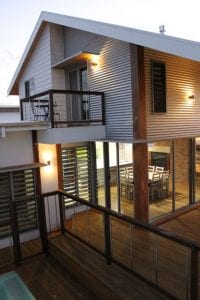